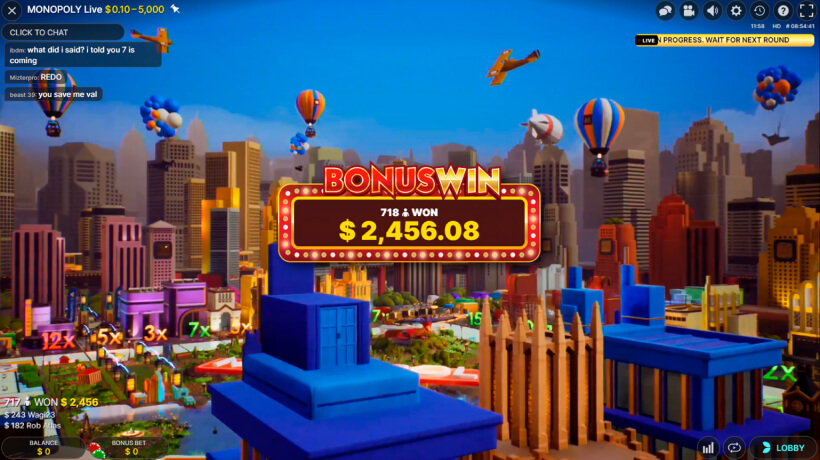 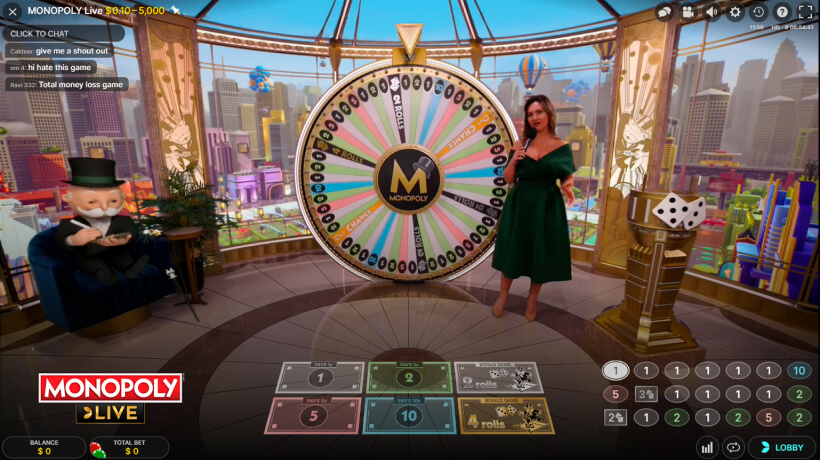 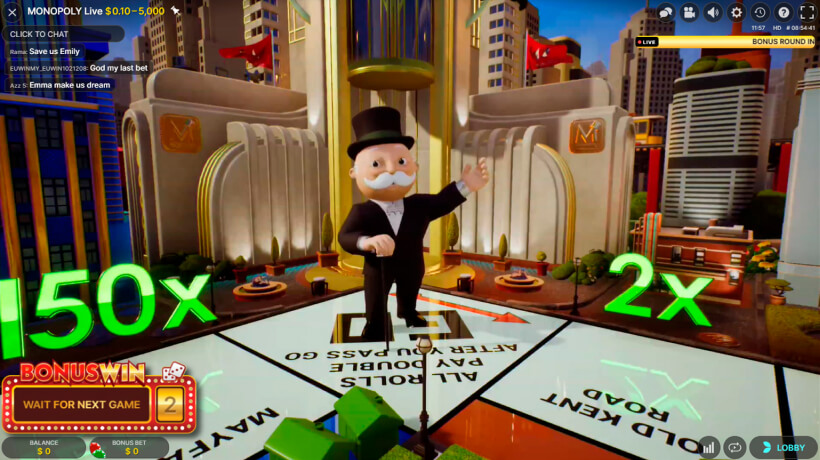 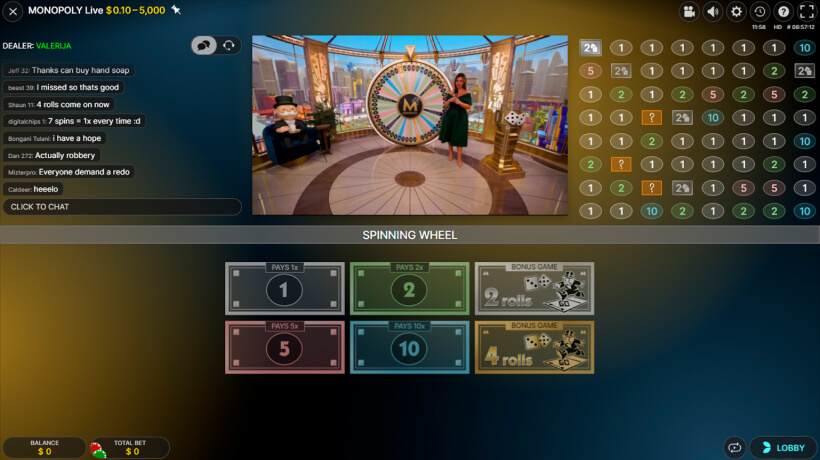 The World's Most Popular Board Game Is Now A Live Casino Game Show!

Evolution Gaming’s Monopoly Live is a marvelous live game show. This unique product is the company’s exclusive created in partnership with Hasbro and released in 2019. Monopoly Live by Evolution Gaming has set the standard for what a top-level online casino game should be. This brilliant product combines a live casino game show led by a charismatic host and AR (augmented reality).

The concept of Monopoly Live

You may have already seen the similar to Monopoly Live idea in another Evolution Gaming project, that is Dream Catcher, although Monopoly Live is licensed by Hasbro itself. The concept of the game is pretty simple and consists of two rounds. The first round is called a Money Wheel game, and the second round is a 3D bonus round.

In the Money Wheel round, the game host spins a wheel, and players predict the segment the wheel is going to stop at. Meanwhile, the virtual Mr. Monopoly sits alongside and waits.

The game wheel has special segments for activation of the 3D Bonus round. All the action of this part of the Evolution Monopoly Live happens in a captivating, augmented reality and is built around the adventures of Mr. Monopoly.

Another exceptional Evolution Gaming project - Monopoly Live. You’d love it even if you’re a newbie in gambling or prefer some other kind of online game. Evolution Gaming team has done an excellent job creating this game - it is a 100% unique and exciting experience. If you’re in for entertainment - you gonna love it, for sure!

Monopoly Live Evolution Gaming studio is quite as grand as you can’t even imagine. It was designed to look like a magnificent golden room atop a skyscraper. The centerpiece of the studio is a huge wheel called the Money Wheel. The 3D augmented reality Mr. Monopoly sits in his chair on the left side of the wheel. He is quite a tea-and-newspaper enthusiast while he is waiting for a bonus round. And there is a golden plinth on the right side of the wheel. It is a special place for the dice which are rolled during the bonus round.

Evolution Monopoly Live interface has a modern design, and it is easy to use. All the betting options are placed at the bottom of the game interface. A big Monopoly Live logo is on the left side. Underneath the logo, the player can find the balance and bet amount. Six Monopoly banknotes are placed in the middle. Four of them are numbered with 1, 2, 5, 10. Two banknotes are marked with symbols of 2 Rolls and 4 Rolls. Gamers place their betting chips on these banknotes. It should be mentioned that players are able to bet on more than one note – they can bet on as many as they want. To the right of the banknotes, the wheel history is shown. It reveals the last 24 numbers the wheel has landed on.

The Money Wheel Round

Do you remember a vertically mounted wheel in the centre of the studio? A charismatic Evolution Monopoly Live game show host will periodically spin it. The Money Wheel is split into 54 equal segments separated by pins. The 48 segments on the wheel are numbered 1, 2, 5 and 10. Gamers place bets on these numbers.

Mr. Monopoly presents a Chance Card to everyone whose wheel points to one of the Chances. This card can be a random cash prize or a random multiplier bonus. The cash prize can be earned by a player who made a bid during the round. The multiplier bonus adds a multiplier to the winnings on the next spin.

The bonus round starts when the wheel lands on a 2 Roll or a 4 Roll segment. It makes Mr. Monopoly hop out of his armchair and lead the way to the immersive 3D Monopoly world. If the wheel landed on the 2 Rolls segment, then the player will receive two rolls of the dice, and the 4 Rolls segment is equal to four rolls of the dice. Mr. Monopoly will walk a number of steps equal to each roll of the dice. Wherever Mr. Monopoly stops, he collects prizes. Each property has its own value, as it is presented in the original game. Your initial bet will be multiplied by how much Mr. Monopoly has accumulated walking around the board.

All the multipliers on the board will be doubled if the dice rolls are high enough for Mr. Monopoly to make a full journey around the board, passing GO.
But the bonus game isn’t so easy. Gamers should beware of some bad squares on the board!

If Mr. Monopoly lands on the Go to Jail, then a double must be rolled on the dice to continue playing the round. If the double roll isn’t achieved, then everyone will take whatever bonus winnings they’ve accumulated to this moment.

If Mr. Monopoly lands on the Income Tax, then the player will have ten percent of the winnings reduced.

If Mr. Monopoly lands on the Super Tax, then the player will have twenty percent of the winnings reduced.

What is the main theme of this game?

This live casino show game is all about the legendary Monopoly! You’ll find many different elements of the original board game playing it.

Is it available only in English?

Monopoly Live is also available in German and Italian.

What is the max possible win in Monopoly Live?

Can I play Monopoly Live for free?

Yep, you can spectate the game without making bets.

Can I play Monopoly Live on my PC?

Yes, you can. You can enjoy this game on any device you want without downloading and installing any apps.

Monopoly Live casino game show is a fascinating mix of Evolution Gaming’s popular money wheel game (Dream Catcher) and Monopoly game elements. Thanks to innovative approaches in online entertainment, the game stands out among others.

Monopoly Live Evolution is definitely a highly entertaining game. And of course, it is a cross-platform game available on all devices, from tablets and laptops to smartphones. To accommodate both: your internet speed and your device, you can set streaming quality to medium, high or HD quality. So, the Monopoly Evolution slot collects 10 out of 10 for its interactivity, design, sound and gameplay.

Live casino games are made to provide you with the opportunity to get the casino experience from the comfort of your own home. But Monopoly Live is not just a casino game - it is also a live show with a beloved character from our childhood. You'd love it as I did - from the first minute of the gameplay.

Evolution Gaming Monopoly Live looks gorgeous. This title has awesome graphics and a superb sound design. The game itself is rather basic with the accent on the Monopoly charm and elements. Monopoly Live is definitely the most exciting game available online.