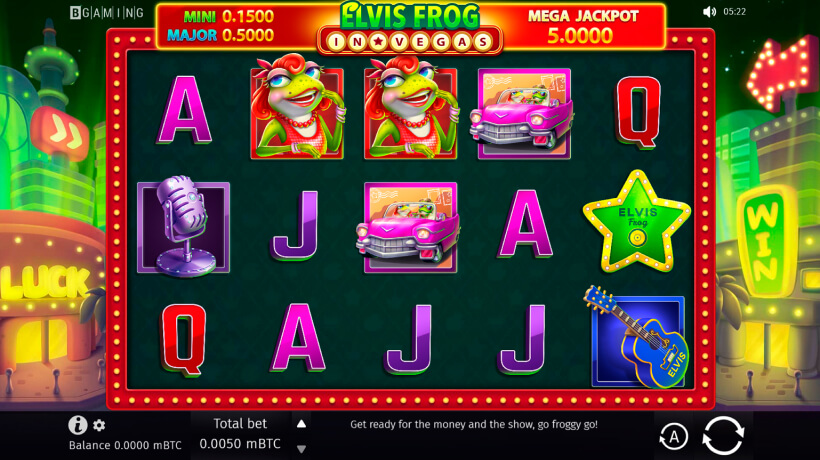 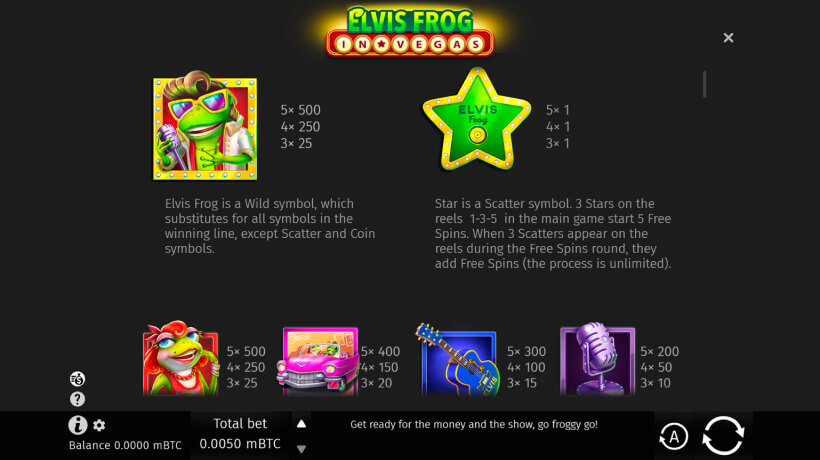 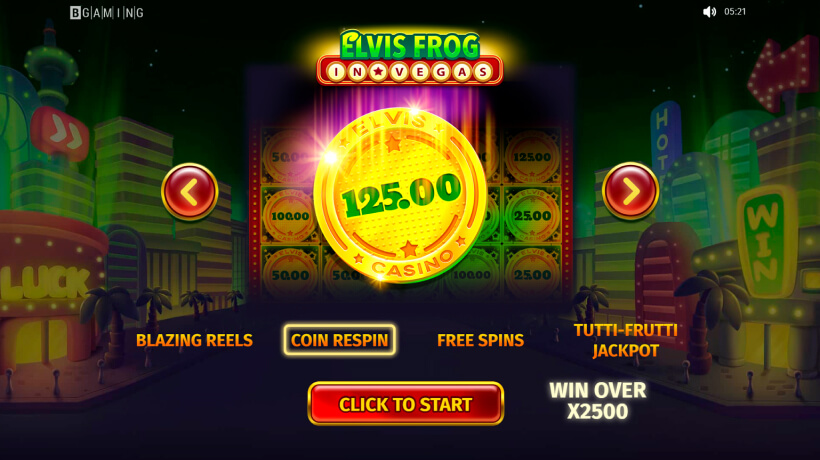 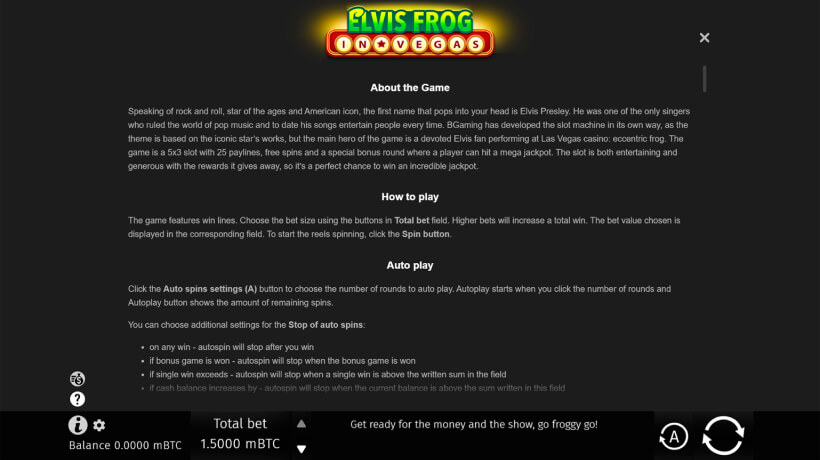 A New King Of Rock'n'roll Is In Town!

Alas, usually providers don’t put much thought and passion into the themes of their slot games. Many slots are ordinary and made in the most popular media settings like the Wild West, Egypt, etc. Luckily people in Bgaming are open to experiments and inventive solutions. They created a bright piece of art called Elvis Frog In Vegas. Even the title of this online slot makes the gamblers curious.

Our editors’ office has already seen hundreds of different games of various themes and several unusual mechanics. But blending the character of a world-known star, the spirit of Las Vegas, and a cartoon frog mascot is a brand new idea. So, let’s find out all about this game and its features!

Game Details
Title:
Elvis Frog in Vegas
Software Provider:
BGaming
Type:
Slots
RTP:
94%
Maximum Payout:
2500
Min Bet:
2.5
Max Bet:
25
Paylines:
25
Rows:
3
Reels:
5
Cross-platform:
iOS, Android, MacOS, Windows
Pros
Cons
Top Player Comment
I would like to start by saying that I like Elvis Frog in Vegas. This online video slot is a comparatively good one. Graphics are sleek, and the audio additions amp up when things heat up. The game keeps players on their toes. Elvis Frog in Vegas is definitely a great choice for people interested in free spin rounds. You can even try this slot for free via its demo version.
Perry Rot

Elvis Frog in Vegas BGaming presented on 7 May 2020, is a bright and well-designed game. As it is clear from the title, the slot is made in a Las Vegas theme. Las Vegas is known for its extravagant legendary stories, over-the-top casino resorts and its gambling opportunities. It is hard to imagine a better theme for the online slot. The main character of the game is a charming frog, who is an Elvis impersonator. The slot’s background is a city street designed in pretty cool cartoon-style bright graphics. Pleasant rockabilly music perfectly completes the atmosphere of the game.

The game doesn’t confuse players with dozens of different symbols – there are only ten in this online slot. Winnings are triggered by landing five, four, or three matching symbols. Of course, players can find traditional card symbols such as Aces, Kings, Queens and Jacks in the Elvis Frog in Vegas slot. Also, players can see such symbols as a microphone, a blue guitar, a pink Cadillac, a Lady Frog and the Elvis Frog. While the Lady Frog is a usual symbol, the Elvis Frog is a Wild one. There is also a scatter symbol designed as an Elvis Frog’s star on Hollywood Boulevard. Plus, players can find some gold Coin symbols in the game.

Gamble round
This round is available in case of the win in the main game and gives the opportunity to gamble player’s winnings and potentially increase them. The rules are simple: guess the colour of the next card correctly – double the winnings; guess the suit correctly – quadruple them. After a correct guess, the gamer is able to collect winnings or gamble again. In case of an incorrect guess at any time, the winnings will be forfeited.

Free Spins
Three Scatters on reels one, three and five in the main game start the Free Spin round of five free spins. The player is able to earn some additional spins by landing three more scatters during the bonus round.

Blazing Reels
While the Free Spin round is in action, reels two, three and four transforms into one giant reel with an extra-large symbol. This Giant Symbol gives players additional chances to reap instant wins.

Coin Respin
This feature triggers when six gold coins land in a single spin. This bonus round is played only with coin symbols appearing on the reels. Players keep getting more respins until there are no more new coins to land. When the game is finished – the prizes are displayed on the coins. If the player is lucky enough to fill all fifteen positions on the grid with gold Coin symbols, they receive the Mega Jackpot. It is worth 1,000x player’s bet per line value, or 40x player’s total bet. We’ve already mentioned that there are two other jackpots in the game: Mini and Major. To win one of these jackpots, a player needs to land gold Coin symbols with Mini or Major on them.

It is easy to fall in love with Elvis Frog in Vegas slot. It is a great game to relax at the end of a hard day. This cross-platform slot is suitable both for newcomers and experienced gamers. The graphics, animations and sound design are awesome! We’ve tried to describe every detail in this Elvis Frog in Vegas slot review, and we hope it will be useful for the gamblers.

Elvis Frog, with its excellent neon theme and cartoon graphics, is a great slot game with a couple of mostly standard features. This title, with its fascinating and unique atmosphere, is a great choice to spend the evening. Elvis Frog is a very playable video slot!

Elvis Frog In Vegas, with its festive atmosphere of winnings and jackpots, tons of gold coins, is an extraordinary slot. If you’re missing the thrills and frills of Las Vegas and you are ready to rock and croak, this game is definitely for you! This title by BGaming is simply created for real rock'n'rollas!