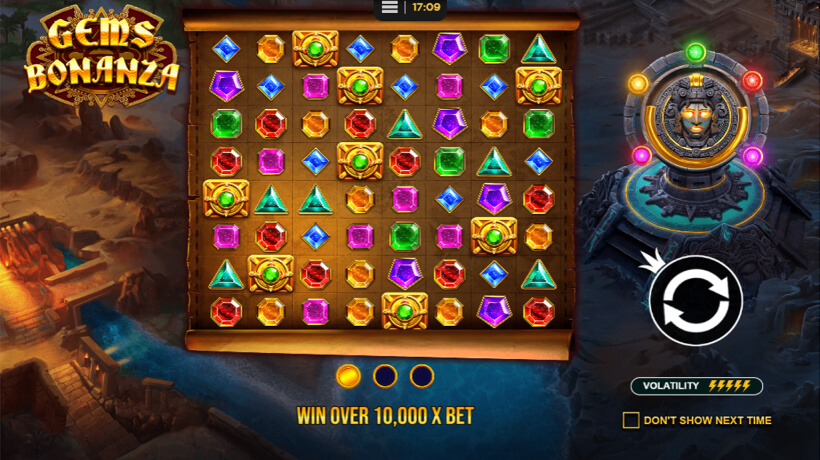 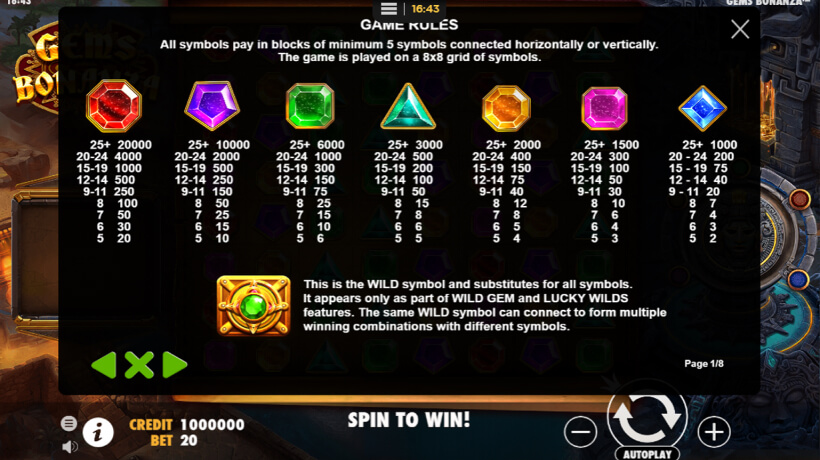 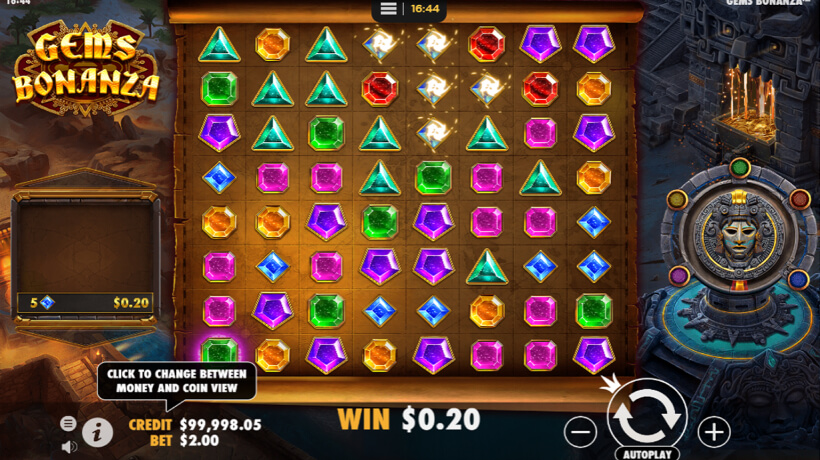 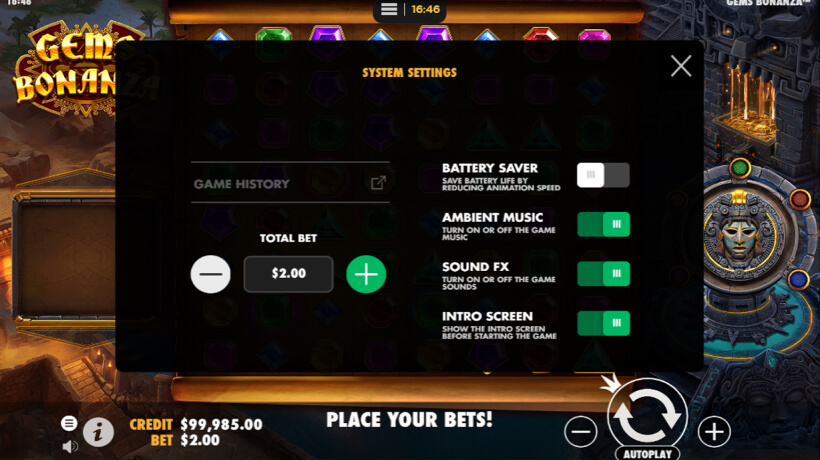 Get ready to enjoy the atmosphere of the ancient Aztec times together with Gems Bonanza from Pragmatic Play. The game attracts with its unusual design and claster mechanics. Spin bonuses will help you to get more winning combinations during the spin.

Gems Bonanza’s potential win of up to 10,000x bet and quite good RTP are the reasons why the slot is so popular in Canada. Moreover, the game has some useful modifiers, which you can try in the free demo. Join our Gems Bonanza slot review and learn how to gamble with a fantastic 10x win multiplier!

Pragmatic Play has always provided us with good games: amazing graphics, beautiful backgrounds, relaxing music. Bonanza Gems slot is no exception. This time they presented Aztec themed game with ancient temples, a mysterious multiplier statue, and colourful gems. All in all, Pragmatic Play has created a magical atmosphere of ancient state.

Pragmatic Play have valued the volatility of the game at 5/5. Usually, high volatility games take longer for the big wins, but when they do, you will get a generous prize. The RTP is respectable with a rating above the average of 96.55%. With the maximum multiplier, you can get a 10,000x your wager.

Gems game differs from classic slots: here we deal with an 8×8 grid. The grid has a cluster mechanic, which means the player wins when there is a cluster of 5 identical symbols. The winning cluster disappears, making place for new ones that tumble from above. This process is repeated until new winning clusters stop appearing, then the next spin can be played.

In addition, Bonanza Gems from Pragmatic Play has wilds, modifiers, and multipliers, which make the game more interesting. However, this time the provider offers no progressive jackpot.

As you might guess from its name, there are shining gems on Bonanza slot reels. The slot has 7 bright gems in different colors and sizes, with the blue stone as the lowest paid symbol, and the red ruby as the most valuable one. Generally, the game offers payouts of 50 up to 1,000x the stake when there are blocks of 25 symbols and more.

There is only one wild symbol in the game – a golden square with a green bright stone in the centre. It can’t appear during the base game, but it is added to the grid during the Wild Gem or Lucky Wilds modifiers to substitute any gem symbol.

During the game, special colored marks appear in random places on the grid highlighting gem symbols with different colors. If there is a winning combination with a marked symbol, it triggers a modifier. Bonanza Gems by Pragmatic Play has five colorful spots:

Colour
Modifier
Multiplier
Blue
Nuclear
Acts as a kind of free spins option: it clears all symbols on the grid and puts new ones
Pink
Wild Gem
Turns one random type of symbols into wilds
Yellow
Squares
Randomly adds blocks of 2x2 of one random symbol type
Red
Colossal Symbols
Adds 3x3, 4x4, or 5x5 block of one random symbol
Green
Lucky Wilds
Puts from 5 to 15 wilds to the grid in random places

You can win more than one modifier at one spin, and in that case, they are played in the order shown above.

Each winning cluster fills the Gold Fever meter to the left of the grid. The Gold Fever has five levels and starts from the first one. Symbols collected during one spin are added to the meter and multiplier are given according to the table below:

The Gold Fever feature ends when the modifier is played and there are not enough collected symbols to move to the next level. Or, when it has reached level 5 and all spin features have been used.Also, Bonanza Gems video slots allow you to simply buy this feature – you can use your money to activate the Gold Fever bonus on the next spin.

What are the bet limits in Gems Bonanza?

The minimum bet is 0.20 and the maximum bet is 100.00, which makes this game good for both experienced gamblers and newcomers.

How volatile is Gems Bonanza?

The volatility of Gems Bonanza is valued as high, so you can expect small but big wins.

How does the Gold Fever feature work?

To trigger Gold Fever you should collect winning clusters. As soon as you collect enough winning symbols you will move to the next level and get multipliers of up to 10x.

Can I play Gems Bonanza from my mobile device?

Sure, Pragmatic Play created a good game that can be played on different platforms of computers and mobiles.

To sum up, Bonanza Gems slots are a good game for relaxation and entertainment. Pleasant gameplay is a key advantage of the video game: the Aztec-themed game looks really mystical. With an 8×8 grid, you have a good chance of getting winning combinations on every spin.

However, it is sometimes difficult to fill the Gold Fever meter, but for that case Pragmatic Play provides you with an opportunity to buy the bonus. Check Gems Bonanza slot for free before playing it for real money and see how bonuses and features work.

Gems Bonanza is a well-designed video slot with attractive features and a lot of potentials. It is easy to play and pleasant to get winnings. Gems Bonanza is full of excitement with its clusters and shining gems.

Gems Bonanza stands out from other gem slots by its Aztec theme. I like these colorful spots that make the game very interesting. But it is difficult to collect enough symbols to get to the next level of the feature meter. All in all, Gems Bonanza is a good slot to play.