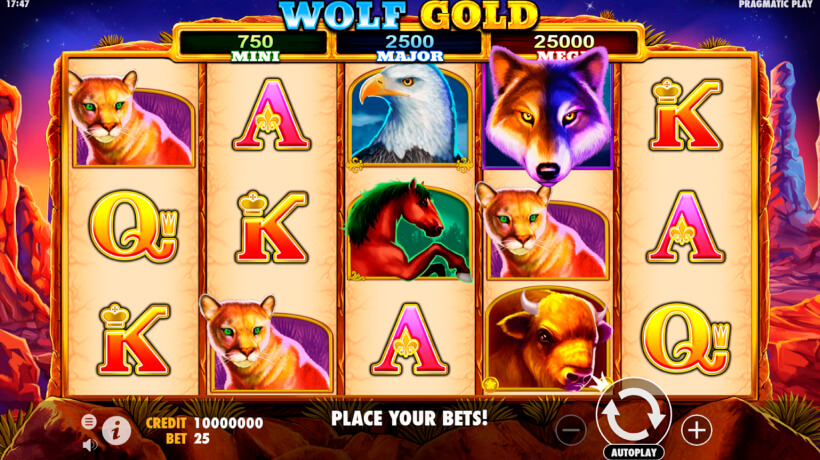 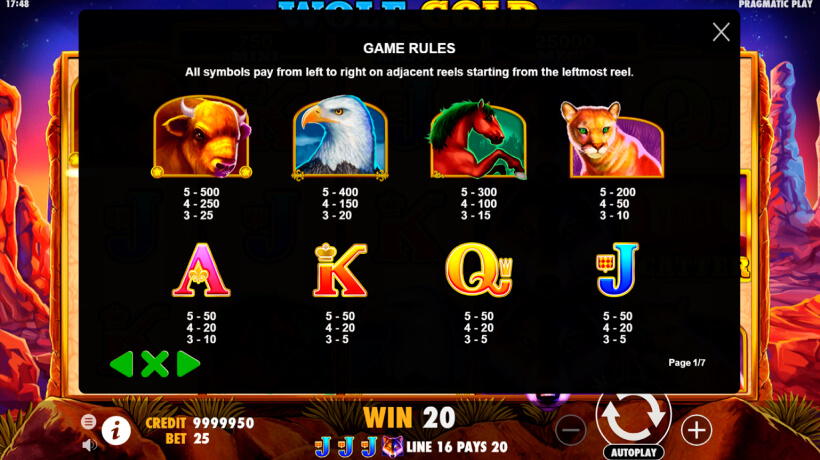 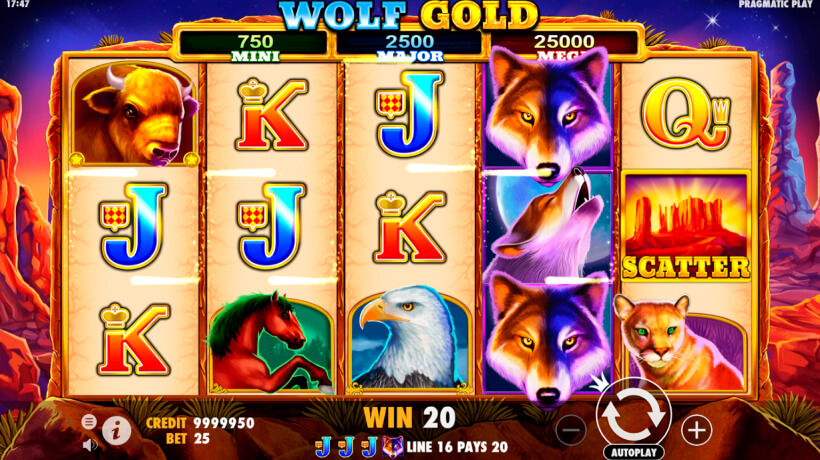 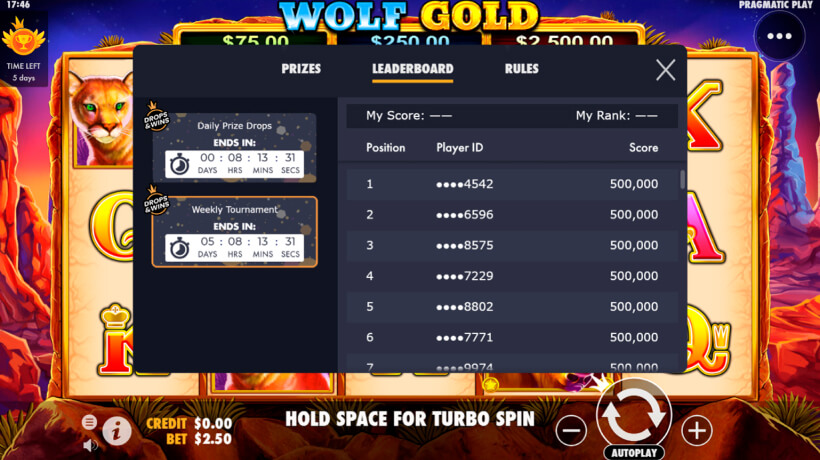 Pragmatic Play’s Wolf Gold video slot immerses players in the atmosphere of the wildlife of North America. The game reminds of several Native American-themed slots – it even has a wolf as a spirit animal.

Being an alpha of a pack of wolves is not easy, so let’s puzzle out the way of staying alive in the dangerous world of the Wolf Gold casino game and even get the best piece of the cake.

Wolf Gold casino game is a five-reel slot with twenty-five pay lines. There is a tough life in the world of the wild plains of North America, but it is well worth the effort. Pragmatic Play’s Wolf Gold game gives players a large max payout, in the form of a fixed Mega Jackpot of up to $125000. So, players, howl at the moon together with wild wolves and be ready for a Big Hunt and huge winnings!

This great slot game by Pragmatic Play is translated into English, Russian, Vietnamese, Chinese, Finnish, German, Italian, Korean, Norwegian, Romanian, Spanish, Thai, Turkish, Bulgarian, Danish, French, Indonesian, Japanese, Malaysian, Polish, Portuguese, Serbian, Swedish and Traditional Chinese languages. It stands to reason that this game is a cross-platform product you can play on all devices, including tablets, laptops and desktops. If you prefer mobile gaming, Wolf Gold is available on all devices, both iOS and Android smartphones.

Game Details
Title:
Wolf Gold
Software Provider:
Pragmatic Play
Type:
Slots
RTP:
96%
Max Payout:
2500x Bet
Min Bet:
0.25
Max Bet:
125
Paylines:
25
Rows:
3
Reels:
5
Cross-platform:
iOS, Android, MacOS, Windows
Pros
Cons
Top Player Comment
Wolf Gold is definitely my top game of any online video slot. I love the lavish bonuses of these games. I seem to be lucky and get a lot of them. Wolf Gold gives so much excitement to make you never want to stop playing it. This online slot is the kind of game I am ready to recommend highly to my fellas.
Bob Larkin

Pragmatic Play’s Wolf Gold casino game is set in the North American wilderness far away from civilization. The background of the slot is a landscape full of staggering rock formations in the light of the late afternoon sun. It should be noted that the design of reels and buttons is simple but creative. The developers hewed a stone of the rock into beautiful cave drawings. And the sound design is also great. The howling of wolves and bird cries add the feeling of being in a desolate part of the world to the game process itself.

All the navigation buttons are on the pay-table bar at the bottom of the game page. Players can find a Main Game Interface button and Volume control on the left side of the bar. An Information button is placed just after them – gamers are able to find out all the game details by clicking it. Credit and Bet labels are placed to the right of the Information button. They are showing the current balance and current total bet. The usual “auto-play” button is placed on the right side of the pay-table. On each side of it, players can find betting controls designed as plus and minus.

The Pragmatic Play’s Wolf Gold video slot theme features the North American wildlife setting, and in the backdrop of this wilderness, the game has all kinds of iconic animals on the reels: cougars, buffalos, horses and eagles. Each animal symbol has its unique animation, and it looks awesome on all the platforms. Classic card symbols are also presented – gamers can find Aces, Kings, Queens and Jacks. These four symbols are the low-paying ones.

There are three special symbols at the Wolf Gold slot game. The first one is the wild symbol represented by the wolf. This symbol can replace all other symbols on the reels, except the moon symbols and the scatter symbol. So the wolf helps players to get winning combinations. Players are also able to find a scatter symbol showing a great mountain. It appears on reels 1, 3, and 5. Getting a scatter symbol on each of these reels at the same time rewards winning 1x player’s bet. Plus it will start the free spins bonus feature! And there are Money symbols designed as shiny moons showing different sums of cash in the game.

The minimum bet amount on a spin at the Wolf Gold video slot is $0.25. And the maximum bet amount is $125. The logic is simple – the more money players bet per spin, the more money they could win. Remember to bet sensibly and only risk money you can afford to lose – it is the main rule of professional gambling!

A scatter symbol starts the free spins bonus feature in addition to winning a 1x player’s bet. Players get five free spins initially, with the possibility to win three more free spins when they get three scatters on the reels while the bonus is active. The free spins in the Wolf Gold casino game take place on special reels. During the free spins bonus, giant symbols are placed on a new big reel instead of the second, third and fourth reels.

If a player is lucky to get six moon symbols on the reels – the Money Respin bonus feature starts. All usual symbols fade away, and only the moon symbols are left on the reels. The player will receive three respins. Each time a new moon symbol lands – the number of respins is reset to three. The bonus finishes when the player runs out of respins. All the values of the moon symbols are added together, and the player wins the prize. Or, if the player is a lucky devil, the bonus finishes when the entire set of the reels is filled with moons. In this case, the player will not only win the sum of all the symbols but the Mega Jackpot as well, which is worth 1,000x the total bet.

What is the RTP of the Wolf Gold?

Its RTP is 96%. It is appropriate to say that it is what exactly gamblers expect to find in online video slots.

Are there any free spins in the Wolf Gold?

Yes, this video slot has a free spins bonus round.

What are the main features of the Wolf Gold video slot?

The Wolf Gold slot is packed with some great bonus features. Gamers can find money respin feature, blazing wheels and stacked wilds in this game. There are also three fixed jackpots: Mega, Major and Mini.

Can I play Wolf Gold on mobile?

All Pragmatic Play's slot games, including Wolf Gold, are fully mobile compatible. You can enjoy it on all Android, Windows and iOS smartphones.

Is it possible to play the Wolf Gold slot for free?

Yep, you can try out a free demo of the slot game to learn its mechanics.

Is the Wolf Gold slot worth playing? Wolf Gold is a game that’s definitely worth playing. The various bonuses ensure that this video slot offers loads of excitement to the gamers. Modern graphics, animation and sound design make the world of the game incredibly fascinating. This game can be an exciting adventure both for the experienced gamers and the newbies.

Wolf Gold is not a brand new thing in the world of video slots, but it manages to make itself look decent enough. The main interest comes mostly from the huge fixed prizes that can be won in it. Also, the game fascinates with its graphics inspired by North American prairies full of mountain cats, wolves, buffalos, wild horses and American eagles.

Wolf Gold is an absolute must-play hit. Its bonus features are insane! The graphics and music design are good and fit this slot perfectly. And it doesn't necessarily matter if you hit some free spins or any other bonuses, believe me, you gonna have much fun playing Wolf Gold.